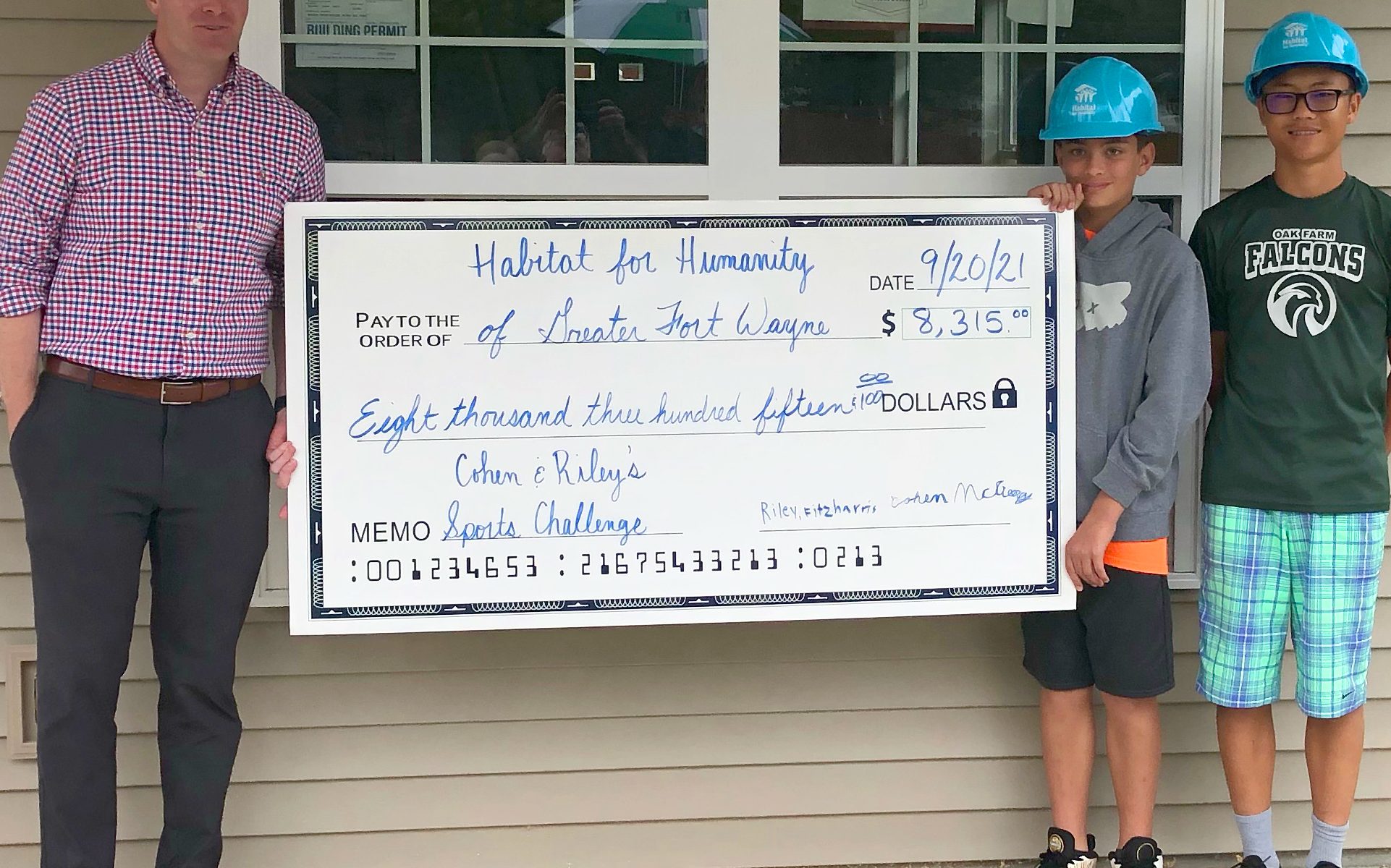 Young Students Challenge Community to Fight Homelessness, Raise Over $7,000 for Habitat for Humanity

When Riley Fitzharris, 14, and Cohen McCreery, 12, were challenged by their teacher at Oak Farm Montessori School in Avilla, IN to “make a difference in the world,” they ended up deciding to host a fundraiser to help the homeless.

After deciding that a hands-on approach best suited their interests and combined skill sets, they organized their thoughts, rolled up their sleeves and began a nine-month quest to build a detailed campaign that would eventually involve their families, friends, and the entire Oak Farm community.

The result? A Family Friendly Sports Challenge, which raised over $7,000 to help fight homelessness. KELCO was a proud co-sponsor of the event.

Riley explained that, for him, a family trip to Washington, D.C., last winter planted the seed.

“We met a homeless person who asked for food,” Riley said. “My dad didn’t know what to say except to take him to a restaurant and we got him a hot chicken pot pie because it was during the winter. That is what sparked this whole thing for me. He said it was his birthday that day, so it was his birthday gift.”

Later, when students in their class were asked to consider ways they could have a positive impact on their community, Riley and Cohen decided to focus on raising money to help alleviate homelessness through sports.

Their fundraising efforts began when Riley and Cohen, who both love sports, personally approached individuals and businesses in the personal sports challenge.

The challenge and the variety of sports made for a great event, which was designed by the boys themselves. Participants of all ages were able to get active and get competitive with basketball free-throw contests, sprints, soccer, and football.

Michael Kuhn of Habitat for Humanity said Riley and Cohen raised more money than some of Habitat’s corporate donors.

“They just took it from there and ran with it, really. We’ve had very little to do with any of the planning or organization of this,” Kuhn said. “This has been all Riley and Cohen.”

Kuhn said organizing events of this scale is often difficult for adults, so he was blown away by Riley and Cohen’s efforts over the past several months.

“It’s genuinely and truly inspiring to us to see such initiative and drive in such young students who see a need that’s out there,” said Kuhn. “They did their research and reached out to an organization that they felt compelled to help. And then to take the initiative to really bring it to fruition is just incredible.” Habitat for Humanity will use the funds to help build homes for those in need in the coming year.

As news spread of the event via social media, the story gained media attention through local TV, newspaper, and radio. You can listen to the boys’ interviews on WBOI here and on FOX 55 Fort Wayne here. You can also learn more about this event here and here

Congratulations to Riley and Cohen on your outstanding efforts!

If you’re ready to be more efficient and build your bottom line, contact us at 815-334-3600 or by email at [email protected]. We’re proud to serve our longtime clients and welcome the opportunity to help new customers.